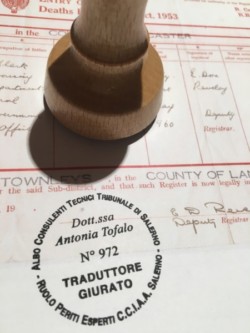 In recent years, sworn translations have assumed an increasingly important role as a result of the explosion in international trade and the increase in migration flows. This has led to a sharp increase in demand for this type of service.

The main difficulty of legal translation lies in the difference and in some cases the absence, of legal concepts between the source and target languages, i.e. between the two different legal systems in question. Consequently, the main reason for the difficulty of legal translation is the untranslatability not of terms, but of concepts which are specific to some legal systems and not to others. In such situations, the legal translator must make important and highly responsible choices, including that of creating a special neologism in his own language or that of adopting existing conventions.

The procedures for certification and legalization vary according to the document in question. It is the responsibility of the client to obtain information about the specific requirements from the requesting authorities regarding the need for a sworn or certified translation. Clients always have a lot of doubts about these procedures. Let’s try to understand the difference between the terms used. What does certified translation, sworn translation, apostille or legalization mean?

What is a certified translation?

Some countries do not require sworn translations to consider a translation valid for all purposes and with legal and official value. Thus, they require a certified translation or a notarized translation.

What is a sworn translation?

Sworn translations can be documents such as:

In Italy, a translation can be certified by following 3 different procedures, each involving different professional backgrounds and situations:

What are legalization and apostille?

Legalization serves to certify the origin of the deeds and the qualification of the person who signed them. It consists of official certification (by means of a special stamp) of the legal status of the public official who has signed a document, as well as the authenticity of the signature itself.

A first example is represented by the states adhering to the Hague Convention of October 5, 1961, adopting the apostille instead of legalization. Just like legalization, the apostille provides for a special stamp attesting to the authenticity of the document and the legal quality of the issuing authority. The signatory countries of the Hague Convention are listed at the following link: https://www.prefettura.it/FILES/docs/1173/Convenzione_Aja_Stato_applicazione.pdf

The European Convention of London of June 7, 1968, provides for the exemption from legalization of deeds and documents issued by the following consulates parties to the Convention: Austria, Greece, Malta, Portugal, Sweden, Cyprus, Ireland, Norway, Switzerland, France, Liechtenstein, the Netherlands, the Czech Republic, the Republic of Moldova, Turkey, Germany, Luxembourg, Poland, and Spain.

Under the Brussels Convention of May 25, 1987, ratified by Italy with Law No 106 of April 24, 1990, all forms of legalization or any other equivalent or similar formality have been abolished between Belgium, Denmark, France, Ireland, and Italy, even if the documents are to be produced at the consular posts of Belgium, Denmark, France, Ireland, and Italy operating in the territory of a State which has not ratified the Convention.

The Convention between Italy and Germany of June 7th, 1969 excludes the need for legalization for public acts and documents issued by one of the two States and used in the other.

When is legalization or apostille required?

The original document (therefore, to be translated) must always be provided with legalization or apostille depending on the states in which it is to be relied on. If the document is to be relied upon abroad, once it has been translated and certified, it must also be legalized or apostilled (depending on the state in which the document is to be delivered) on the translation (the signature of the judicial officer who signed the translator’s oath statement is certified).

The Hague Convention applies to documents issued by an authority or official under the jurisdiction of the State, administrative documents, notarial deeds and official declarations (registration mentions, visas for a certain date, and certificates of signature). Documents issued by consulates and documents relating to customs or commercial operations are exempt.
The legalized document, if provided with an Apostille, can be immediately transposed in the territory of all the States of the Convention without the need for further legalizations.
In Italy the legalization of signatures or the apostille are performed:

Finally, on the subject of sworn translations, the Brussels Convention, concerning the exemption from the Apostille in relations between the countries of the European Union, has not yet been ratified by all the countries of the Union and is therefore in force only between Belgium, Denmark, France, Ireland and Italy.

Procedure for documents from abroad to be valid in Italy:

Procedure for documents issued in Italy to be valid abroad:

IMPORTANT: It is not allowed to CERTIFY translations from one foreign language to another: the translations to be certified must necessarily pass from Italian.

The cost of a sworn translation also includes stamp duties of € 16.00 that must be affixed on the translation and not on the original document, every 4 sides from the first page of the translation (even one line each) or every 100 lines (regardless of the number of pages). In the calculation of the pages, the oath statement must also be taken into account.

Under Italian law, there are several cases of exemption from stamp duty, depending on the intended use of the sworn translation. Some intended uses with the exemption under national law are: